Buried under six blankets and illuminated by our cell phone flashlight apps, cloudlike puffs of our breath escape as we giggle under the covers trying to figure out how we’re going to make it through the night. There is no heat save an old kerosene heater that is propped up on an old broom handle.  It’s powerless against the icy stone walls of the farmhouse. Creeping across the marble floor to pee is unthinkable as the cold penetrates the thickest of wool socks straight into your bones.  Without even discussing it, we both end up in the middle of the bed hoping to create a warm spot. Excited for our first full day on the farm, we both manage to fall asleep quickly. 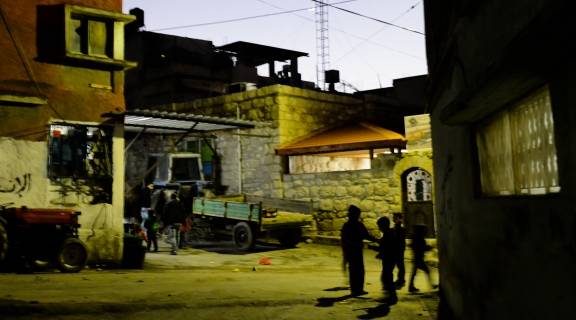 The children play in the streets of Nisf Ijbal at dusk.

We’re here to make a documentary on behalf of the Middle East Investment Initiative (MEII), a non-profit formed to stimulate economic development in the Middle East.  It has brought us to the tiny hilly village of Nisf Ijbal in northern Palestine. But for the Arabic and occasional Yasser Arafat graffiti on a wall, one would think we were in southern France with its rocky hills covered in sweet smelling herbs. Our driver, Eshak, left us yesterday and will be back for us later tomorrow evening.  He’s protective and has become our friend.  He called this evening to check in on us, making sure we were alright since no one had met the farmer before we came.  We feel right at home and have made buddies with their three children, all under the age of five.

The sun is at least an hour or more from rising and Athaan, the Muslim call to prayer, begins. I sit bolt upright and stare directly at the videographer, Caroline, traveling with me. It feels as if we just fell asleep but a prayer that sounds as if it’s coming from under the bed has jolted me awake. It’s been like this since we arrived, the sleepless photographer, me, staring at sleeping Caroline. I love the prayers that drift across the cities of North Africa and the Middle East but this one happens to be piped through a loud speaker directly above the farmhouse.  It’s meant for the entire valley below to hear and even wakes Caroline who has managed to sleep through everything else these past three weeks. I mutter something and can’t go back to sleep. We laugh at the absurdity of the early hour. The heater has gone out and it’s still dark. The rooster is up and so are we, shivering and sliding into our frosty dirty clothes.

The air is crisp, the sun toasty and a beautiful breakfast all from the farm has been set out for us on the terrace outside our room – warm pita, zataar, olive oil, olives, halloumi cheese, tea spiced with maramia, a sweet herb that grows in the hills surrounding the village. I feel my bones defrost with the tea and the sun’s heat. The farmer and his wife join us.

Imagine Daniel Day Lewis in a Gilligan hat, and that’s Khadir, the farmer.  His wife, a very slight and shy Catherine Zeta Jones.  They sit with us while their three children play in the sunshine. “Saha,” we all say, the Arabic equivalent of bon appetit. We speak very little  Arabic and Khadir, speaks very little English.  Somehow we manage to communicate through smiles, gestures and the Arabic book I occasionally pull out.  Our company isn’t awkward but rather somehow refreshing and real.  We’re curious about each other. 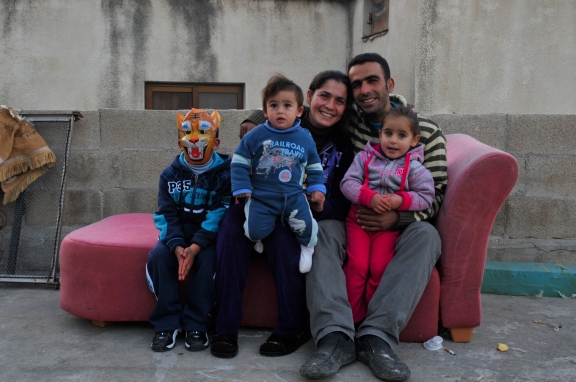 Khadir Khadir and his lovely family on the terrace.

We found Khadir through a farming cooperative in northern Palestine and were told that he is a proud innovator and after years of working illegally in a plastics factory in Israel to support his family, he is finally able to make his living off his land in Palestine.  He worked nights for six years sleeping on the factory floor and never seeing daylight or his children. It was difficult and he wanted to come home.  He has since joined the farming cooperative which supports fair trade.  Together, the farmers have implemented organic farming techniques, are now selling their products internationally and have doubled their income.  It’s a big step for Palestine and it’s farmers and it’s been a successful move for Khadir.

Eager to show us his village and his farm, Khadir leads us through the dusty streets after breakfast, greeting the women opening up their windows from the night and the men gathering out in the narrow streets for their first cigarette of the day.  At the village school we plant olive saplings as the children and teachers begin arriving.  Because the children and teachers gather to watch the spectacle of us filming, school starts late.  They serve us coffee, chocolates, and cookies, as Palestinian hospitality dictates.  I detest coffee and this coffee is particularly strong, like sludge in a cup.  I am not able to choke it down and am fearful I will offend our hosts.  Unbeknownst to Caroline, a coffee junkie, I switch my cup with hers. I will confess my sin days later on the plane ride home.

We stop by another olive grove to get Khadir’s horse, a small horse with a sweet demeanor.  A few children and the farmer’s son, Mohamed, who is celebrating his fifth birthday, join us skipping along the way.  Winding down the road to the bottom of the village we reach another grove where we stop to clear some underbrush. It’s winter and Khadir is just doing some maintenance work as the harvest is over.  Yet another pot of tea arrives and we sit in the dirt for our third beverage break of the morning. 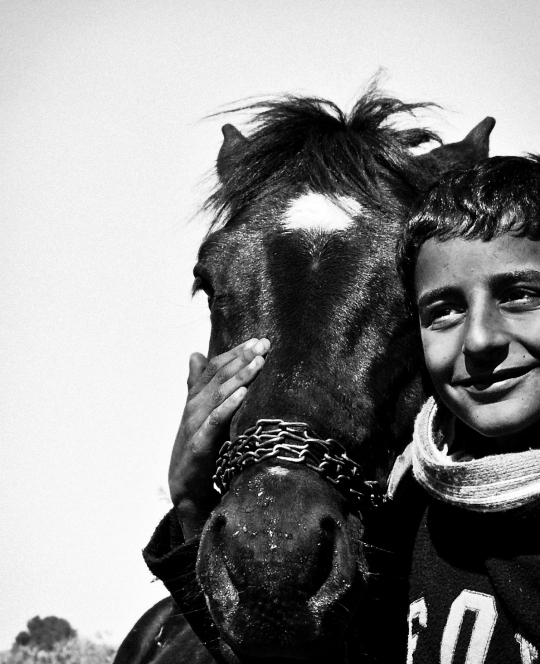 A local boy and the horse.

Since there’s not a lot of work to be done, Khadir has the luxury of entertaining us and leads us up a valley along a stream.  As we enter the valley, terraced rocky hills spotted with more olive trees rise up on either side of us.  These hills belong to Khadir and his family.  He is proud to share his farm with us.  It is stunningly beautiful here and he can tell we are pleased and enjoying ourselves.

Khadir thinks it would be fun to put Caroline up on the bare-backed horse and lead her.  It turns out to be comical as she can’t get up without the assistance of two men picking her up and putting her on it.  Khadir stops to take a picture of her for a keepsake.  At some point I end up on the back of the horse with Khadir. 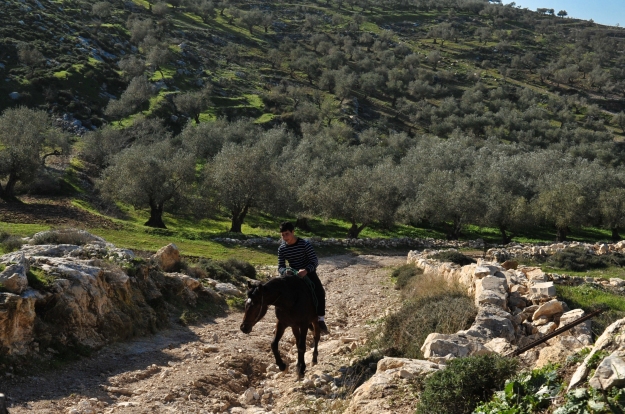 It’s turned out to be a lovely day.  With the temperature in the 60s and we’re glad to be outside and warm.  We sit along the crystal clear stream enjoying the sun and watering the horse.  Khadir squats down and cups the water into his hands, takes a sip and then splashes the rest onto his face.  We share some apple juice and feed the horse cookies. Some local girls make their way down the stream bed, their jeans soaked and laughing. I talk soccer with some of the local boys by sketching a field in the dirt with a twig.  From this, we manage to teach each other some English and Arabic.

Saving the best for last, later in the afternoon Khadir takes us on a tractor ride to the top of his mountain.  Caroline and I ride in the back of a trailer with a couple of the kids, I take pictures while she films.  The dirt road is steep and washed out but the view is breathtaking and worth being jostled about.  We’re filthy and completely in awe.  After spending a full day with Khadir and the kids, we’ve all bonded and don’t want the day to end.  We sit in silence on the rocks stretching the time to make it last.  The light is golden, the sky a deep blue and the ground covered in sweet oregano. 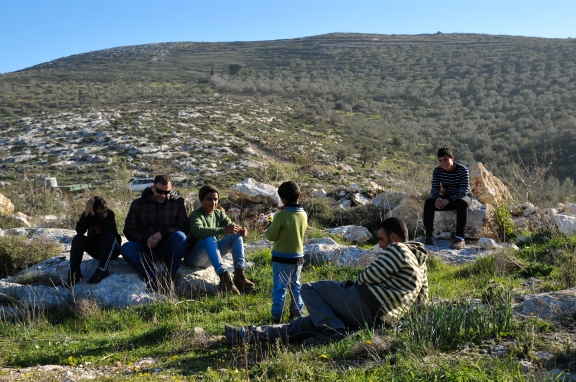 The end of day on top of the mountain.

Our driver, Eshak, has managed to find us at the top of the mountain and is happy to join us for a sit.  He translates for us but we’ve understood all along.  Khadir wants us to know we are welcome anytime.  We are family now.

We end the evening back on the terrace with a delicious chicken and rice meal. The kids are washed, the sun has set, the moon is up and it’s time for bed.  The children’s laundry sways in the evening breeze.  We hug the kids, toss the littlest in the air and say our goodbyes.   We feel the same, Khadir.  We are family now. 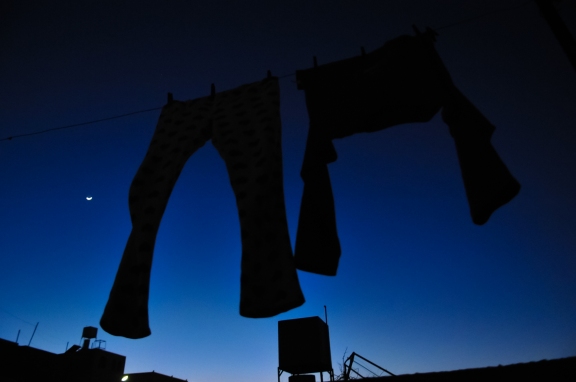 The laundry and the moon.

2 thoughts on “PALESTINE THE BEAUTIFUL”